This week we asked you, our guests and friends, to tell us what Copper Canyon Grill and Stanford Grill mean to you. Everyone who told us their story was entered to win a $50 gift card to our restaurants, and we were overwhelmed with the amazing response! We care deeply about the experience you get when joining us for a meal, from the greeting you get when you walk in the door all the way to your dessert, so it’s very important to us to hear from you about your personal experiences. A big thank you to all who entered and shared with us!

We will be sharing more of these stories in the coming weeks, but today are sharing thoughts from our two winners. Lisa had the following to say about what Copper Canyon Grill means to her:

“Dining at Copper Canyon has become a weekly family ritual, where we create memories, share stories and experience the love of friends and family. The servers have even become our extended family that share in our happy time together.”

We love hearing that our family has become part of Lisa’s family. Amanda had similar thoughts about Stanford Grill:

“Stanford Grill in Columbia was the first place in MD that felt like ‘our place’. We started going as an engaged couple. We have celebrated every major milestone in those walls-marriage, jobs, friends, babies, birthdays, date nights…It was the first place we took our new born son, the place we always recommend, and continues to be our first choice for every get together. Thank you for creating such a fantastic atmosphere, and for giving us a ‘place’.”

Again, thank you to everyone who entered and shared with us! We’re thankful to be part of your story!

Why not bring more ‘happy’ into the world?

Happy Hour has come to Glenarden! Join us Monday-Friday  in the bar from 3-7pm for half price cocktails, $3 drafts, $6 wines, and delicious food specials like our Steak Tacos or Petite Rotisserie Chicken Salad. See the full menu below & get ready to get happy!

Always wondered how we manage to get our Rotisserie Chicken so flavorful and juicy or looking for an easy way to recreate our Bread Pudding? Here’s your chance to find out!

By know you’ve either heard about Chef Michael Wagner, the new Corporate Chef for Copper Canyon Grill and Stanford Grill, or tried one of his dishes like the Braised Beef Short Rib. Chef Michael brings more than 20 years of culinary experience to Copper Canyon Grill and Stanford Grill, and over the next few weeks, he’s going to be answering your questions about our menu items, ingredients and his favorite cooking techniques.

What dish or cooking technique do you want Chef Michael to share over the next few weeks? Tells us in the comments below or on Facebook, Twitter or Instagram using #AskChefMichael, and he may personally answer your question in an upcoming video!

Happy New Year’s Eve Copper Canyon and Stanford Grill fans! Close out the year with a bang with our featured dishes of the week.

One of the most unique and award winning dishes Chef Michael has created is his Coca Cola BBQ Beef Ribs dish. It is to die for and available at Stanford Grill starting on Friday through Sunday! Also, don’t forget to try this week‘s soup pick: Baked Potato. 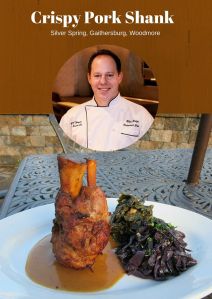 Chef Michael Wagner, a native of New York, is professionally trained in the Culinary Arts from the prestigious Culinary Institute of America in Hyde Park. Chef Wagner has garnered national recognition for his use of bold flavors, artistic presentations and the infusion of fresh, high quality ingredients to create American dishes with international influences. With over 20 years of experience working in multiple facets of the fine dining and culinary industry, he is highly regarded as an exceptionally well-rounded leader in the kitchen. Throughout his career, he has worked for numerous celebrities as a private chef, has appeared on national food shows and has been featured in numerous regional and national publications.

“Chef Wagner’s culinary style is a perfect fit for BRRG’s American Cuisine restaurants,” says David Jones, Managing Partner of BRRG. “Chef Wagner’s quality and integrity in the culinary arts will further enhance our restaurants scratch kitchen concept,” says Jones.  “Our restaurants serve a bold take on classic American favorites, and we are delighted to have one of the nation’s finest, award-winning American cuisine chefs as a member of BRRG’s executive team.”

Prior to joining BRRG, Wagner most recently served as the executive chef at Café Fiorello in New York City, where he oversaw all aspects of kitchen production and menu design. In addition, Chef Wagner has played a significant role in Florida’s evolving food scene. In 2007 he opened the award winning, nationally acclaimed Lola’s on Harrison Restaurant in Hollywood, FL. “Culinary planning, design and execution is my labor of love,” said Chef Wagner.  “I am looking forward to sharing my knowledge and skills with the BRRG team and the communities we serve. I am excited to bring my personal flair on American cuisine to the Washington, DC region.”

We love celebrating Halloween here at Copper Canyon Grill and Stanford Grill! Seeing everyone all dressed up as their favorite character puts a smile on our faces. We don’t like, however, all of the unhealthy Trick-or-Treaters’ candy that comes with the season. With it being the night before Halloween, we have assembled a quick list of three simple Halloween party substitutes for kids!

These 3 quick-and-easy Halloween snacking alternatives are sure to bring tons of fun to a party, classroom or family table in just minutes. Have a happy, healthy, and safe Halloween from everyone here at Copper Canyon and Stanford Grill!

Here at Copper Canyon Grill and Stanford Grill we love celebrating all sorts of special holidays, and who could blame us for celebrating something as delicious as pumpkin cheesecake! That’s right, today is National Pumpkin Cheesecake Day – because adding pumpkin to America’s favorite dessert absolutely warrants a special holiday of its own.

While pumpkin cheesecake can be enjoyed at any time of the year, it is especially great during the fall season when you’re trying to come up with anything other than pumpkin pie in order to impress your guests. Now you can enjoy this fall craveable with this quick and easy recipe we have provided for you! 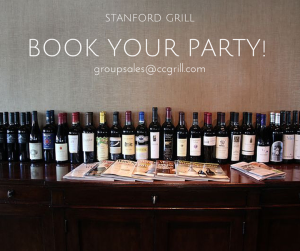 Book your private or group event with Stanford Grill this season. Email groupsales@ccgrill.com for inquiries and reservations.

Here at Copper Canyon Grill and Stanford Grill, family is very important to us. Some of the best memories are made with friends and family Now that fall has arrived, it’s a great time to craft with the kids! With just a few basic craft supplies you can make loads of projects. The kids will love to make an entire patch of pumpkins, leaf garlands, black cats, and gobbles of turkeys. You can even make a playdate out of it and have a few friends over to get some easy fall crafts made. Here are two fantastic ideas for easy fall crafts for the kids!

One idea is this cute Paper Bag Pumpkin Patch. You can make multiple pumpkins and make your own little pumpkin patch. Have younger kids stuff the pumpkins with newspapers and have the older ones paint them. Or let everyone color the bags with crayons instead of paint. Super cute and super easy!

These cute Turkey Napkin Rings are also a great choice for crafting! They use simple items like paper and clothespins and they would look fabulous on your table for Thanksgiving. It’s also a great way to get the kids out of your hair while you are trying to cook. Task them with creating one for each person attending dinner.

Time to get crafting!

One of our favorite days of the week is Thursday, and not just because it’s so very close to the start of the weekend, but also because our soup of the day is the classic Cheddar Broccoli! This creamy stew never fails to please, and today we would like to provide you with a quick and easy recipe to make this soup at home.  With only a few ingredients and fellow broccoli-lovers to share with, this recipe will become a permanent one in your home!